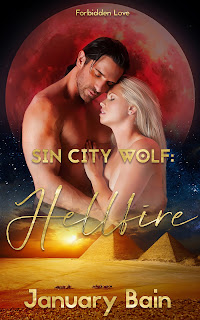 Good Morning to you!

What's it about you ask?

Amara St. Clair is just out for a rare night of fun on the Vegas Strip. But when she discovers her fun-loving side in the Glitter Palace casino, a life-altering altercation with a deadly ancient vampire leaves Amara lying unconscious in an alley near the famous casino.

Doctor, geneticist and genealogy expert Dante Luceres, dedicated to research that will keep his fellow werewolves safe and healthy, is attending a mandatory yearly event of the House of Luceres. Coming across Amara, he saves her life, though vampires and werewolves are forbidden from interfering with each other in the supernatural world. There are dire consequences for interfering with another supe’s domain, and he expects that soon both the vampires and the werewolves will be after them, but he can’t leave the beautiful, vivacious little human to suffer alone.

Drawn to each other, the pair must hide from the world. But with everyone against them, including Dante’s clan and an evil vampire hellbent on having Amara for his own, how can they find a path to a shared future…and true happiness?

Read on for an excerpt:

“My Harley’s out back. Quickest way out of town.”

“I’m wearing a dress. And I’d prefer an Uber or cab. No offense, but I don’t know you.” She jerked her arm to pull away, but I hung on.

“You’re in mortal danger. I’ll figure out the explanation for all this”—I gestured between us—“later when I have access to records and blood testing.”

“Blood tests? What are you talking about? And why does it affect you?”

She exaggerated my hand movements demonstrating the connection between us back in my face. I did note that her hand also trembled, causing an odd emotion to come over me. She was trying to be brave, but it was costing her.

“Are you suggesting that you are not in touch with your obvious physiological responses?” Anything was possible in this alternative world she’d just had thrust on her. Perhaps she wasn’t aware she had become aroused. Or refused to admit it. It didn’t matter, neither of us would be acting on it in this lifetime.

“You don’t understand. That beast that attacked you? He’s coming back, and he won’t be alone. I have to get you away right now.” I added a sense of urgency to my tone in efforts to persuade her.

She did look around with a more constrained expression, as if the boogey man was going to jump her.

“Why would they take me? That makes no sense.” She had the cutest way of wrinkling her nose that made it wiggle a bit.

“Yeah, right!” Now she gave a grimace as if I were fucking around with her.

“Yes. Marilyn Monroe. Only with dark hair. In a blonde wig, you’d be able to pass for identical twins. Your features, perfectly aligned and symmetrical, are above average in scope and dimension.”

I pointed at her face, as if drawing with my fingers in the air. “The distance between your eyes in one exact eye, the length of your face equals three noses. Space from the lower eyelid to the upper eyelid is the same as space between the upper eyelid and eyebrow. Also demonstrated to perfection. And width of the face across the cheeks is equal to two lengths of the nose. Finally, eyebrows begin on the same line as the corner of the eye nearest to the nose. There you have it, a perfect oval face!” I always appreciated sharing such proof positive.

Instead of thanks for pointing out her perfection, what did I get but a rolling of her eyes before she burst into gales of laughter?

“Is that the line you try on women to get them into bed, by any chance?”

Posted by January Bain at 06:12 No comments:

Three dangerous, fang-bearing men are waiting for you to find them 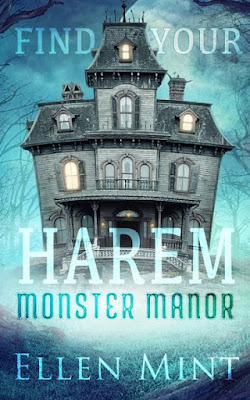 On Halloween night, your car breaks down outside a spooky, crumbling manor deep inside the forbidden woods. With your heart in your throat, you risk the hedges of thorns to explore the mysteries of the Monster Manor. Can you traverse the pitfalls of the haunted house to discover the himbo werewolf, the debonair ghost, and the bookish vampire in order to save them?

The manor hides a huge secret you must unravel before you can free the men. Do you pick the werewolf, vampire, or ghost, or are you lucky enough to banish the evil lurking at the heart of Monster Manor and win the hearts of all three?

This is a romance where you decide what happens, whom you wind up with, and—if you survive the night—to spend it with one, two, or all three hauntingly romantic men.

Posted by January Bain at 04:32 No comments: 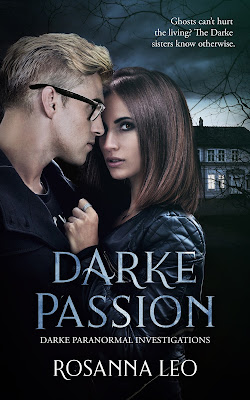 Edwina Darke is one of a trio of ghost-hunting sisters who rid clients of their unwanted supernatural visitors. A badass by nature, Edwina doesn’t run from haunted houses—she runs into them. Yet no matter how many “ghosts” she debunks, she remains troubled by a demon from her own past.

Simon Teal is the co-owner of a historic B&B in Niagara-on-the-Lake, Ontario,

a town famous for its connection to the 1812 War.

Simon doesn’t believe in the spirit world, but something is chasing his customers away,

so he reluctantly allows the Darke sisters to investigate.

When a darker presence reveals itself, triggering their protective instincts,

Edwina and Simon succumb to temptation.

But the evil entity has taken an interest in them, and if they don’t solve the mystery,

someone new could end up going “into the light.”

And it could be one of them.

Posted by January Bain at 06:26 No comments:

Heart of Egypt by Megan Slayer

His heart has always belonged to the man he loves—a modern-day actor? 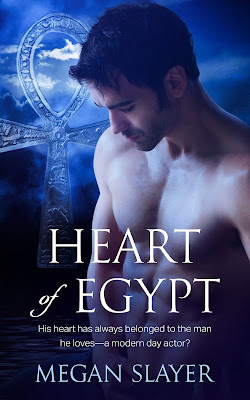 His heart has always belonged to the man he loves—a modern-day actor?

So much so, he refused to turn the gem over to the Pharaoh.

His punishment for his disobedience?

Death and a curse. He shall wear the Heart of Egypt for eternity.

Aiden Cory, star of the show Hunters, has no idea he’s stumbled on a mummy or the chance

When he meets Thut, he’s head-over-heels.

He doesn’t know about the Heart of Egypt, but he knows he’s attracted to Thut.

There’s the minor problem of Thut being a mummy.

Can modern love save Thut from an ancient curse?

This alien tracker has finally found his mate, but how can he claim her when she loves another? 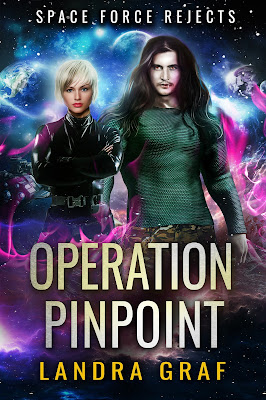 This alien tracker has finally found his mate, but how can he claim her when she loves another?

Captain Ravenna Joyner has one mission: rescue her missing lover. She'll ruin every ounce of her credibility to save the one person who made her universe brighter, even partner with a bloodthirsty alien who can't be trusted.

Dravos Trax has one mission: find the missing Space Force vessel Perseus. If he follows through, his prison sentence will be commuted. Only he doesn't expect to find his mate in a human who is in love with someone else.

When the ship is located, the occupants are found dead, including Ravenna's lover. But, there's no time to mourn, as the other Space Force Ops commandos betray Dravos and Ravenna to cover up the murders, putting their lives in jeopardy. They'll have to put aside their fears and stow this simmering passion between them to find a way to gain their freedom. Though the chase for answers only leaves more questions, and the commandos won't stop until all loose ends are tied.

Posted by January Bain at 05:59 No comments:

After a month and no sign of the witch hunters, Layla thought she was in the clear. A gigantic werewolf has different plans. As if her life being threatened by a mad werewolf isn’t enough, the world seems to be ending. At least that’s what an impossible, deadly-to-gaze-upon angel living underground claims.

Layla is tasked to find whatever is ripping tears in the realms, causing creatures to appear and unravel everything in the world. Good thing she has an angel by her side. Garavel may not technically be angel, despite having white wings and a golden glow, but he’s sweeter than sugar and adores witches. It’s impossible to not fall for the cuddly teddy bear. Except, once Layla finds the culprit, Garavel must return to his master’s side and she’ll never see him again.

She’s going to need her sarcastic incubus, steadfast werewolf and stately ghost at her side. If not, she doesn’t stand a chance in hell of surviving the ride.

Posted by January Bain at 07:11 No comments:

I call on the fates to bring my love to me. As I will it, so mote it be… 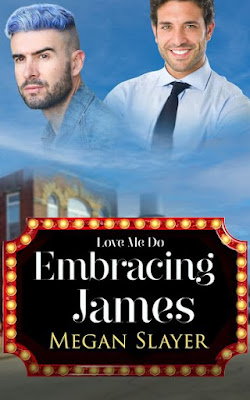 I call on the fates to bring my love to me. As I will it, so mote it be…

Nikki Sinclair isn’t interested in love. She’s happy as a model and doing her own thing. Besides, keeping people at bay means she won’t get hurt again. Then she runs into Kaine. He’s nothing like she expects and exactly what she never realized she needed. But he’s got a past. It’s up to her to decide if she’s willing to summon this bad-boy mechanic or keep going on as a solo act.

Love can be a tricky thing. What if fate has its own idea for Nikki? She’s not willing to argue, especially if it means having her bad boy.

Time to do some summoning.

January Bain
January Bain has wished on every falling star, every blown-out birthday candle, and every coin thrown in a fountain to be a storyteller. To share the tales of high adventure, mysteries, and full blown thrillers she has dreamed of all her life.